Transformers 3 Dark of the Moon Review

Ok folks. Iszy here to sound off about Transformers 3 Dark of the Moon.
First let me state for the record that I am a CG junkie. I am willing to forget bad plots and even terrible acting if I can get stunning visuals. This is what makes my feelings about the latest Transformers film so perplexing.
I'll begin with the quality of the 3d in this film. The 3d was quite well done. With the flood of films being released in 3d, it was refreshing to see the technology used to good effect. Never once did I feel distracted by the use of 3d.
Next up? The effects. I've read reviewers of T3 refer to the film as epic. WTF? The visual effects might be considered epic. I was truly captivated to see giant a giant Decepticon putting a choke hold on a skyscraper but it just was not enough. While the Autobots and Decepticons were well designed, rendered and animated, the gripe I had with the second movie applies to this one as well. Transformers 2 was plagued by action that was so complicated and fast, that it was difficult to tell which characters were fighting at times. The speed issue was improved upon in the third installment but I'm willing to bet that hand forced by the fact that the film was presented in 3d.
Now to the meat of my problems with the film. Plot plot plot. Where was it?
SPOILER ALERT!
So after one viewing here is my breakdown of the major plot elements:
1. Since helping to save the world from the Fallen, Sam has broken up with his old girlfriend and found love in the arms of a new hottie that is way out of his league. She is a very successful executive assistant to a strikingly good looking billionaire, which of course makes Sam feel woefully inadequate.
2. Speaking of Sam feeling inadequate... Since the last movie, Sam has been unable to find a job. His parents have been hassling him about this to no end. Poor Sam just wants to feel as if he is making a difference.
3. Oh I forgot to mention that there is some "tension" between Sam and the girlfriend because of the little Autobots that live with them. More about the Mini Autobots later. Tension is in quotes because the relationship is completely flat. I wonder if they hated each other on set. Yeah, I think so.
4. Back in in time. An Autobot ship crash landed on the dark side of the moon. By the way all of the moon except perhaps some crater rims get sunlight. The dark side is just the side that faces away from us because the moon is tidally locked with the Earth. The discovery of this event leads to the space race.
5. The Autobots have been doing covert ops since the last film. Yep. The giant alien robots have been attacking points in the middle east and...never mind. During one of the raids, the Autobots discover that an Autobot technology is present on earth...and they didn't bring it here. Oooooooh I'm telling mamma on you!
6. Optimus gets pissed and confronts the secret "we work with robots" people. The secret wwwr people spill the beans and off go the Autobots to the moon. They bring back a few cosmic control rods "that's what I call them" and Sentinel Prime, the former leader of the Autobots. Optimus revives Sentinel with the Autobot command matrix and has his old teacher by his side once more.
7. Megatron has been revived at some point and sound wave is now the most kick ass Decepticon in the universe.
Ok this is getting just as monotonous as the movie so I'll just throw the next bunch at you in no specific order.
Sentinel turns on the Autobots because he has cut a deal with Megatron to rebuild Cybertron with the cosmic control rods.
The cosmic control rods are actually teleportation devices and they are used to bring in a sleeper force of Decepticons from the moon.
Supposed to be funny secret agent guy from the first movie comes back as an author and still has all kinds of secret agent connections and technology.
Retired air force special ops guy and his homies show up to battle the threat.
Girlfriends boss works for the decepticons.
Turns out that the decepticons needed the Autobots to bring Sentinel back to life to activate and use the control rods.
Sam is upset that Bumblebee hasn't come to see him.
Megatron and Sentinel have a tension filled alliance that Sams girlfriend manipulates to turn Megatron against Sentinel just as he is kicking the crap out of Optimus.
Flying wing suit guys do some hardcore stuff, the two little robots ground a big ship
Wang knows who Sam is and gets killed because of it.
Sam goes on a bunch of job interviews.
Lots of buildings get ripped up and people get killed.
I've left out about half of the movie.
Do you get the point?
There were at least four movies in there waiting to get out.
Romantic comedy
Armageddon style alien invasion film
An actual movie about giant robots
A buddy combat film
And some really cool video game cinematics.
How would I change the movie?
Take out:
The stupid racial stereotypes among the Autobots
The useless relationship story. Keep the girl, or a girl and 86 Indiana jones junior.
The endless falling through window scenes. (leave that to Robocop)
The stupidsupposedtobefunny secret agent guy
The parents
The job hunt
The two little robots
Put in:
More action and dialogue for the transformers
I could say much more but I'm tired. I'd love to have a crack at a re-edit on this film.
I'm out.
Posted by Iszy Iszard at 9:57 PM

Email ThisBlogThis!Share to TwitterShare to FacebookShare to Pinterest
Labels: transformers 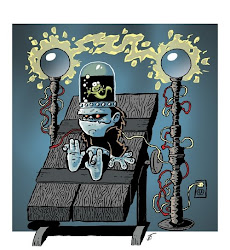 The BADMONKEYBRAIN Collective is a Northern VA based group of artists, writers, cartoonists, friends, and fellow aficionados of cool stuff!
When we travel to conventions together, we are BADMONKEYBRAIN. We often hang out in coffee shops and breakfast joints in the area--an expanded group of the same predilections, calling ourselves ARTKLUB. If you see us sitting around, sipping espressos, while drawing monkeys and furkini-clad lovelies, stop by and say hi!